Agribition… What A Trip!

by admin
2 Comments
If you haven’t made the trip up to the Agribition in Regina, Saskatchewan you are really missing out! This show is one of the funnest that I have ever been to with some of the nicest people you can imagine. Now I love going out to Denver every January for the National Western, it is our Super Bowl and there is no place that you can find that quality of Hereford cattle… simply the pinnacle of the Hereford show season every year. But with all that quality comes pressure and pressure usually brings pissed off. There are hints of that same pissed off at Agribition but there is something that calms it down just a bit, for me it was the Rye!
The cattle up there were very good as well! Most just a bit bigger then I would like them to be. A few fellow Americans and I joked that feed must be cheaper up there (and as I type I get a text that December corn is up 11.5… grrrrrreat).
Next topic the food. We ate the first night at this awesome steakhouse type of deal that was right by our hotel the food was great and probably the best that I had the whole trip but I couldn’t finish all of it (could have been a result of the nerves while meeting the girls family for the first time) but it was very good. Then the real Canadian food started, I don’t think I ate anything where gravy was not present the whole time! I don’t understand why they get to eat as much gravy as they do and America is still fatter… must shiver the weight away!
The coolest thing I saw was the Supreme Champion show… Worth the trip to see a ring packed full of the best show cattle in Canada and to top it off a Hereford Bull breed and shown by Big Gully Farm was the Supreme Champion Bull!!! He looked awesome and beat out one of the best Charolais bulls that I have seen to capture the title.
Wow long post but it was a great week and I hope I didn’t leave too much out. Awesome trip and to my Canadian friends I hope to see you in Denver… I think I owe most of you a drink or five! 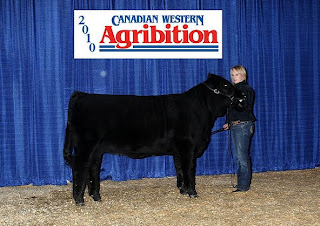 This is a Simi heifer that the girlfriend and her family sold for $6,250!