Another Great Iowa State Fair in the Books!

The 2012 Iowa State Fair was a very special one for me. Crystal and I rolled down to Des Moines really early Saturday morning with the tack and stock in tow. We took 5 head which included a cow/calf pair, bred heifer and two additional heifer calves. Before the show is always a great time to walk around the barns either sniffing out the competition or looking for your next calf. I really wish we had a day to hangout at the stalls after the show but that is a whole different story.

This year the judge was Brett Barber from Dumas, Texas. There were 203 head of Hereford cattle entered, which I think might have been the highest it has been in a while. The day started off with the showing of the cow/calf pairs. Crystal thought we were in the second class so the show waited a little bit for us to get to the ring but we weren’t the last ones their either so it was all good. We walked in at the end of the class and walked out at the front. What a great feeling and huge relief, we really wanted that class win! We then went out for the champion cow/calf selection and were fortunate enough to be selected as the champion. Those cow/calf deals are a ton of work and my hat is off to the people that drag (or get drug) a pair to all these shows, I think it will be a while before we take one again! Right after the pair showed we had to take the three heifers who were born the same day into the ring. Crystal showed the calf from the pair, Max Cherry showed the S109 x 173P heifer and I took the Shock & Awe x Ginger baby. Crystal was pulled out in second place, I was pulled third and Max was fourth. Judge Barber decided he needed to walk the top four and switched his middle pair with the Ginger heifer moving up a spot. The class was won by a flashy About Time heifer from Baja Cattle. Baja also won the Hereford Herdsman trophy, it is fun to see other young producers excel!

So after the 2, 3 & 4 we had a bit of a gap until the bred showed. And this gave my father-in-law plenty of time to get her ready. Rob came down from Alberta to help us at the show and man oh man was he a big help. He washed, lead and answered any of my questions no matter how off the wall they were. He had the cattle looking GREAT when they walked into the showring. I think Rob was happy to get back to his Hereford roots. When it was finally time to head to the ring Teardrop was fitted to the max and looked great. She would go on to win her class and then get many looks during division but didn’t get a banner. She will have a Revolution heifer calf this January and we can’t wait!

The 2012 fair was one will will not forget and we will share pictures with you as soon as we get them. The three heifer calves we showed are all available and we have pictured two and will get them posted early next week.

This show was made very special not only by the success in the ring but by the people that we got to share it with. My mom and dad came down Sunday afternoon and brought along with them Travis Smock who you might remember was the best man in our wedding. Travis quickly caught on and was leading calves in no time. My Grandpa Jim and Grandma Judy also made it to see the show. One big surprise was seeing my Uncle Bob and his girlfriend Tiny at the show, when I saw them I even said “Hi Bobo!” while we were showing the pair. And once again thanks to my father-in-law for coming from Canada. With out the support of all of these people it would not be possible to do what we do.

We are very excited for the future of JJB Cattle Company and we hope that you all share in that excitement as well. Thank you all for the support and love and friendship and knowledge, we won’t let you down and have never been more excited for our future! 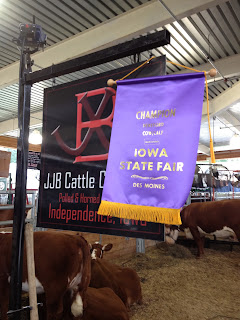