We only have two cows left to calve here at JJB Cattle Company and I am finally confident enough to say that this faze of the cattle raising process has been a success. We started out with three heifers out of the Perks/Langford owned Ramona cow sired by Shock & Awe. There will be one or two of those heifers in our string at this years Iowa State Fair. We then moved onto some AI calves with an Online heifer, a Right Track bull and a BR Currency bull calf being born. All three are really nice and have a shot to make the string as well. The bull that we bought from Whispering Pines to breed heifers did a great job delivering small calves with a lot of vigor. We will have no problems trusting him with the 7 heifers that we retained out of our 2013 calf crop. Our herd sire from Perks Ranch who is a full sib to the aforementioned Ramona cow has a really cool heifer out of a Battle Ground daughter that goes back to the Nanna cow; she could make some noise. We rounded out the calves that have been born as of yet with a maternal sister to Parker that is sired by Right Track and an About Time heifer out of the Bright Lula cow now owned by the Cook family in Arkansas. All in all a very successful calving season and we can’t wait to show you these babies, our deepest set yet.

We are very excited to see what all of the other breeders have had this year as well. The bar keeps getting raised higher and higher every year.  The Hereford train keeps chugging down the tracks and there is still room on the bandwagon. If you are on the outside looking in don’t be scared, just jump on in, the waters fine.

Thank you to Randy Martin and the Lookabills for purchasing Honey Love at the Iowa Beef Expo. I think she is ready to get to a warmer climate and meet her new friend Tyler! 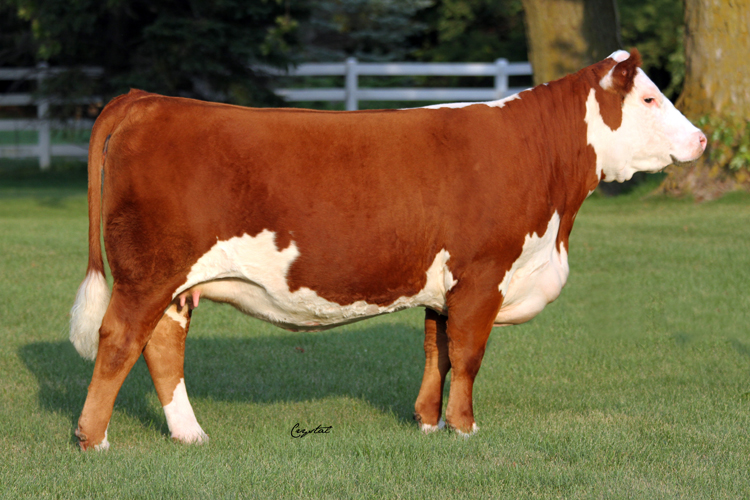 Today we were finally able to get the videos of our Iowa Hereford Select Sale lots shot and edited. Mother Nature has been tough on us this year but we are very happy with the cattle that we will be selling on the 13th of February. You will be hard pressed to find the quality of cattle that you will find at the Iowa Beef Expo and we feel we are bringing some of our best yet. Click Here to view the sale catalog. If you have any questions please feel free to call or e-mail, our contact info can be found on our Contact Us page.

Swore I’d never step foot in Hilton Coliseum growing up an avid Hawkeye fan. Then I married a KSU alum and now I’ve been to Hilton and Jack Trice more then Carver and Kinnick as of late. Now my long awaited review of my experience of Hilton Coliseum and “Hilton Magic”-

The seats are comfy. 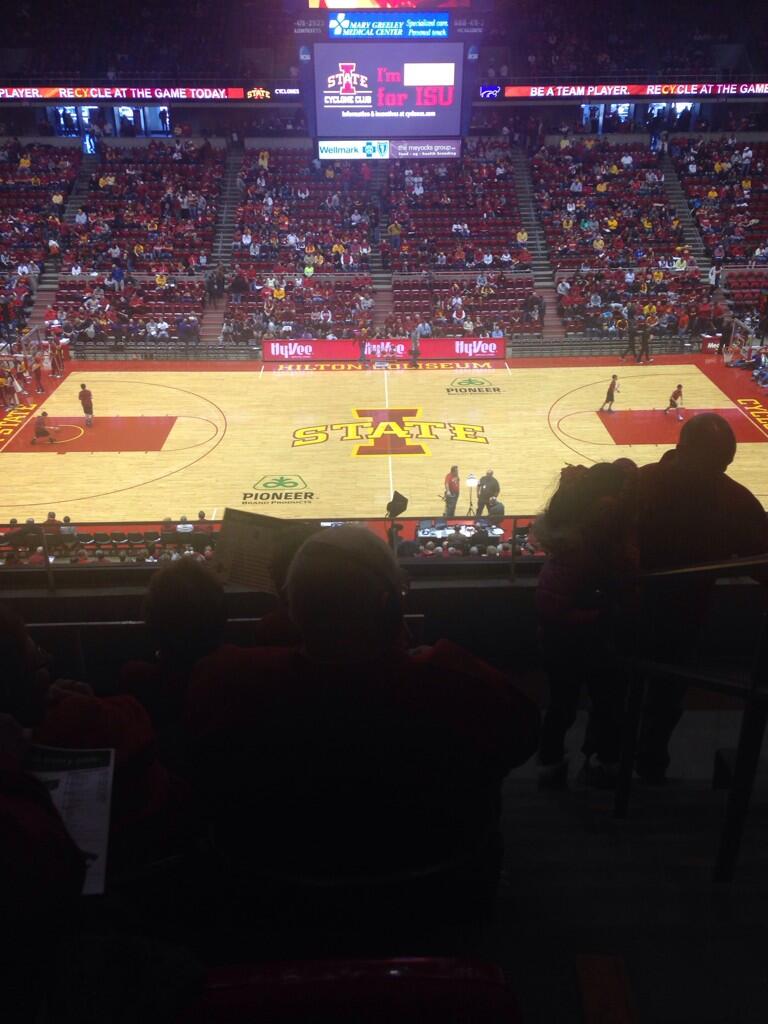 The First of the Year is Here.

The first calf of the year has arrived at JJB Cattle Co.! She is an embryo calf out of the Ramona cow (owned by Perks & Langfords) and sired by Shock & Awe. She is a flashy little one weighing in at 85 lbs. There are two more siblings to this heifer due today and I think if they hold on like their mommas look like they are going to they will be bulls, which is just fine with us.

We hope that you all have had a very successful start to the year and that it continues to be so. You are the only one that can make or break your day/month/year, do what it takes to make it great, you’re worth it.

Honey Love brings us full circle, she is out of the foundation of the herd “Lucky” who was the first cow I ever purchased. There have been brothers and sisters to this heifer that have went to work in herds all over the country and this one can do the same.  Honey Love has all the look you could want for the showring. EPD’s, look and lineage, Honey Love has it all! More info on this showstopper as we near the sale date.

We have a beast on our hands here at JJB Cattle Co. I could go on for days about this bull. Parker will be selling at the 2014 Iowa Beef Expo and is the type that we have been trying to raise since this herd was started. He has the EPD’s and the phenotype that will keep him in our AI rotation for years to come. When we decided that we would be selling Parker we knew we had to keep at least 1/4 in herd use. A bull of this caliber will be an easy addition to any herd. Parker is triple bred Online and is an example of line breeding working, this will add predictability to his progeny. For more information including a video of Parker coming in January please head to the For Sale page. If you have any questions don’t hesitate to contact us.

We Bought a Simmental

This past weekend we added another breed to JJB Cattle – a Simmental. I grew up with Simmentals, and my family still raises them under the name High Country Cattle Services. This story begins back in 2001. I was only 16 years old, but I knew I wanted to add a female to my herd that would be an investment. Something that wouldn’t be just a show heifer. She would be a foundation, and a female that would hopefully produce enough revenue to get me through college. (Attending school in the U.S., when then I was paying out-of-state tuition, and each of Canadian dollars were only worth $.60, wasn’t an ideal plan). That year I found Signature 19L.

Interestingly enough, 2001 was also the year that Jon bought Lucky, which became a foundation of his cow herd.

Thankfully, Signature did her job and produced many females that did exactly what they were supposed to do. They were productive cows that made a mark in both the showring and pasture. Over the years I had sold most of my females and ended up with one last Signature daughter, CDY Red Signature 20W. Last year, Dad had mentioned on his trip down to the Iowa State Fair that both her and her heifer calf were looking quite good, and now might be the time to sell. With Jon and I wanting to purchase a farm the following summer we knew that we could use the additional income. We decided to sell both Signature and her heifer calf in the Checkers sale. Again the Signature cow family did exactly what they were supposed to do. Together the pair brought $45,000. Signature was going to help buy the farm.

This fall Jon and I headed back to Canada for my sister’s wedding. While home a red heifer calf quickly caught our eye, and dad mentioned that they would be selling her in Checkers. She was a great-great-grand daughter of Signature. As Jon and I crawled into bed that night we both turned to each other and said we need to buy that heifer.

So last weekend we bought RJY She’s a Sure Sign 42A. We had kept it a secret from our family that we were going to make a run at her. Needless to say they were pretty shocked when JJB Cattle Co. was announced as the online bidder. We are very excited to see Sure Sign this weekend when we get home to Canada for Christmas. We’ll see if the Signature cow family continues to do exactly what they are supposed to do.