Busy is a good thing!

So I just got back from my little, tiny, baby, married woman, of a sisters college graduation! I could not be more proud of her and had a great time with our family down in Fort Worth this past weekend. We also got to see Mr. Wade Perks and his bride Brie down in the Stockyards for a drink or two. Now tomorrow I will head on down to the Ranch in Skiatook but will be taking a trailer down. In the trailer will be the bull that I bought from the Ranch and a heifer that they are going to maybe take to Fort Worth for the Stockshow at the end of January. This is a very exciting prospect and I hope that she can cut it. If she doesn’t though that is fine by me. The heifer going down is named Ally which is short for JJB ALL OF THE LIGHTS 11Y after one of my favorite Kanye West songs (naturally). She is also a maternal sister to the heifer that I sold last year at the Iowa Beef Expo and a paternal sibling to the three that I will sell there this year. After my little, tiny, baby, sisters big, huge, awesome wedding, I sold half interest in Ally to one my mentors, and could not be more excited to have him be a part of JJB Cattle Company. The future is very bright for this heifer and is one of the reasons that I have been so excited to be as busy as I have been lately, this is not because of how good she is, it is because I can’t wait to make more like her! 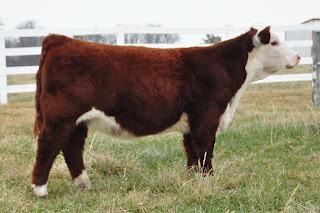 (as a side note she really does have a level top… that is the lack of clipping ability I had mentioned in an earlier post showing true!)
Social Share