Today marks my first post on the JJB blog.

Last week, I had a once in a lifetime opportunity. I was honored to be apart of Christy Collin’s first OSU Livestock Marketing Course, and it was incredible. I always admired Christy and her work, however it was also an excellent opportunity to network with people from across the country who are passionate about the livestock industry.
The course was extremely hands on and covered photography, video, Photoshop, video editing, ad design and promotion. I plan on doing a follow up post to share some of the lightbulbs moments I had, however this first post is going to be about where Christy started.
I had always heard about the legendary film camera that Christy shot her photos with, and I was very excited that she brought it with her to the class. The camera that Christy began with, and that took many of those memorable images, was actually the same camera that took the first photos of the moon. She told the class that the larger than normal sensor on the camera allowed her to focus in on every hair on the body of the heifer or bull in front of her. 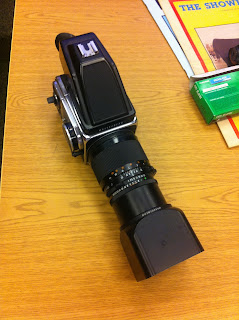 Christy fought the change to digital cameras, and didn’t put her original down until 2007. You could tell by the emotion in her voice that I am pretty sure she would still be shooting with that camera today if it didn’t take 10 days to ship off the film and receive the image back.
Christy also showed us the very first ad and photo that she believes put her on the map.
Christy said that this Double Stuff ad really made a lot of people take second look. The ad was one of the first digital ads, and the magazine wasn’t even able to handle the file. It had to be send directly to the printer. You have to think back then that there wasn’t email. You could go broke just buying enough memory to transfer your files over to another computer. It is amazing that we have come from that to this…
This ad of Christy’s made me stop in my tracks and will always be a favorite of mine. She said that this ad took a lots of guts. One she had to work up enough courage to present the idea to the guys. When this gorgeous gal showed up no one at the barn was very sure Christy had any idea what she was doing. Christy also said that she took some flack – some people thought it pushed the envelope too far, and was degrading to women. Her response,”It isn’t like she is in her bikini.” The young lady in the ad was a neighbor girl, that was quite a tomboy. No one had ever seen her look like this before. I would say the concept worked.
I hope that Christy will continue to offer this class to others looking to grow their talent. Keep an eye on the blog as I continue to share my experiences and the knowledge that I gained.
Until next time,
Crystal
Social Share
One Comment