by admin
0 Comment
Things have been going fast and furious here at JJB Cattle Co. as of late. There have been two calves born with one that should be coming out into the world at any moment. The past few days we had a snow storm that was rather large… you might have heard about it on the news but you had to be paying attention or you might have missed it HA!

Some bumps in the road have been encountered but nothing that hasn’t been remotely easy to deal with. For example my heifer Ceci calved 2-2.5 weeks early and didn’t have any milk ready for her little heifer calf so I became the mother of this beautiful heifer calf. Ceci had this calf the first night of the snow storm and the calf came backwards… I had worried she had been trying to have the calf too long and we had lost her so when the vet pulled her out and she shook her head it was one of the best sights I have seen. The heifer then spent a night in the basement before moving back to the farm. Getting her to take a bottle was also a chore but is no longer an issue and it looks like this little lady might just make it.

The first calf of the year was born a week past her due date but all was well with her and you can catch her sprinting around the pasture as you drive by on 150 North. Hopefully the third will go that same route.

As far as Expo prep goes everything is going great! Last Friday we took the bulls over to get their BSE testing done and both passed with flying colors. They are all taking shape and I can’t wait for you to see the difference in these animals when compared to their videos taken in the beginning of December. 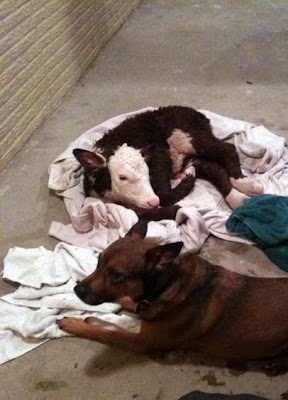 Skye with “her” heifer. 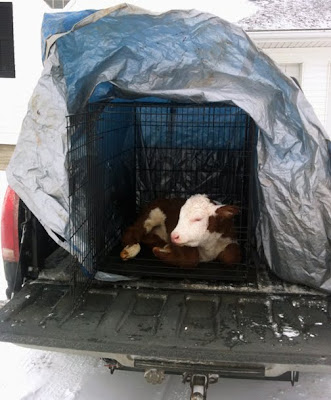 The Redneck cattle hauler… Yes that is a dog cage with a blue tarp… It was actually kind of a nice ride over. 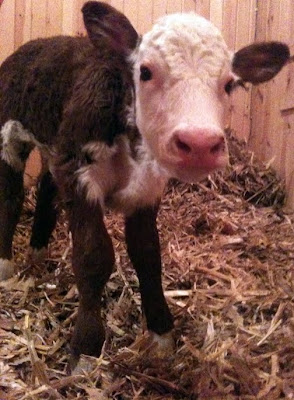 The heifer in her new temporary home.

Stay warm out there and remember to watch the videos of the expo cattle and register to bid on LiveAuctions.tv if you can’t make it to Des Moines in two weeks!
Social Share