by admin
2 Comments
Last night I got the heifers in the barn and thought it might help get them in easier if they knew that they would get to eat once they came into the barn. So I tied them up and put the feed in their pans and walked up to put the pans in front of them… this is where the trouble starts. The nice easy going May heifer Serena that I had rinsed and clipped the night before decided she doesn’t like feed pans. She started to buck and bawl like she had been branded and eventually knocked me down in the sand. No big deal get up and brush yourself off right?!?! Well then I remembered the January heifer that was tied next to her and instantly started to army crawl out of there as fast as I could! In the end all I ended up with were a few small bruises that might have even been there before but it just goes to show that you can’t be too careful…. Stay safe out there! 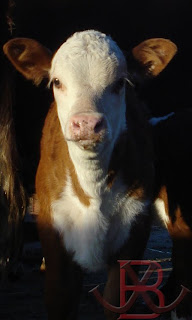