What an AWESOME weekend

Had an amazing weekend that started with a trip down to KC and then a hop over to Manhattan for a football game and ended with a stop back in KC to watch the Hereford heifer show at the American Royal before driving back north to Independence. Whew what a whirlwind!

The most exciting thing that I saw this weekend was that National Hereford Heifer Show at the Royal. If you have not seen a National Hereford show in the past few years you need to get your butt in the stands or at least walk through the barns. It is impressive to say the least. The quality of the cattle has improved by leaps and bounds. The bottom end is the old middle to top end and the depth, performance and eye appeal is superior to cattle from days gone by. In the past friends from other breeds have come to look at the Hereford cattle in the barns and they would say “that’s a good one… for a Hereford.” and now maybe without realizing it they say “that’s a good heifer.” It is very exciting to see these improvements as a young producer with a young herd. We have the opportunity within this breed to make even more improvements and build to compete with any one in the ring and out where it counts in the pasture. I feel as long as we keep them sound and don’t loose sight on that while moving forward we will be tough to beat!

Excellence can be contagious if you let it. 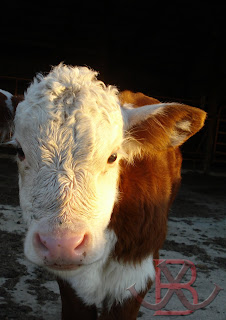 Max’s Fall calf decided she wanted to show off her Afro this morning.
Social Share