Another Fair In The Books

Well since my last post another Iowa State Fair Hereford Show has come and gone. This year the weather was better then normal and the cattle were extremely exceptional. Last year the judge kind of beat around the cattle that were over conditioned and this year it seemed most of the exhibitors had taken note. The cattle were much fresher in their appearance and that is a good thing to see. I took a Polled heifer and a Horned bull to the show and they didn’t look half bad. The heifer had some bloating issues the week before the show and wouldn’t you know it on show day… the air was back. We got the bloat taken care of but there was no way to make her full enough, those are the breaks I guess. She still got second in class and I received more compliments on how she looked this year then I did last year when she was the Reserve Grand Champion. I guess you don’t have to win to receive praise. The Horned bull was my big challenge. We had to walk from the new stalling barn down to the showing pavilion right past the arriving 4H exhibitors. This was my bulls first time off the farm and it got a little hairy at times but in the end all was well and he walked out of the ring with a light purple banner hanging from his horn.

This was by far one of the best state fairs that I have attended and it seems people could recognize all of the hard work that was put in. Now it is back to the real world and mowing pastures and rotating pastures. The next big stop for JJB Cattle Company will be the Iowa Beef Expo in February and even though this is a ways off the preparation has of course already begun. I will be breaking the heifers that I hope to take to the Expo this weekend and hopefully have their first pictures to show you sometime in the next two weeks.

I will leave you with a video of the cows getting turned out into the creek pasture. You might also notice a little June calf running out with them… There is sure to be more on that little guy later.

Right Around The Corner

On Saturday morning I will be headed down to Des Moines for the Iowa State Fair. This is the reason for the absence of a blog post for quite some time now. The show string has come together nicely and hopefully will do well in the show… I guess you will find out how they do next week as I will be sure to post the results ASAP. Very excited to see all of my fellow Iowa Hereford breeders and maybe even more excited to see their cattle! Each year this show seems to grow and with that growth the level of competition is also on the rise.

Last week I got all of the calves weaned besides the June calf and all are doing well. The pictures of the calves will be coming after the fair as well! The only photo that I have to share with this post is one of Legacy when he was getting ready to be loaded to head back down south! 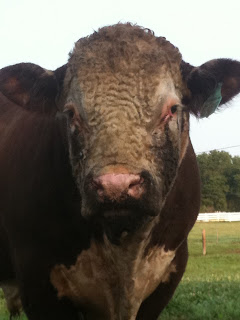 Hope to see you at the Fair!!!

As a young cattlemen on of the most frustrating things to deal with is peoples doubt in my ability. This may not be the case for others who grew-up in a cattle operation, but for me it is seemingly a daily deal. In the hustle to try to “prove” myself I think I might start to distrust others expertise.

About two weeks ago I stacked some round bales near a fence and you guessed it, the bale slid off and onto the fence. This was really no big deal I just figured I would stab the bale in the net wrap and then pull it off the fence so that there would be no chance of it slipping and breaking the fence. I showed up to the farm after work yesterday to find Gar

Wow, what a beautiful Iowa morning it is! Calves are all fed and the creep feeder is full. Everything looks good other then the amount of air in Ceci’s stomach this morning… Nothing a little mineral oil won’t take care of! And if you haven’t or don’t use mineral oil to get rid of bloat you should stuff works great and as long as their stomach isn’t too messed up from the bloat they will kick back on feed and never look back but if you question it sometimes I will give them a sulfa bolus and maybe some kao and they are fine. (disclaimer I am not a certified vet and sometimes not even a certified cattlemen so use advise with caution hahaha) But all in all a good morning with clear eyes on the calves and full bellies… progress continues. Tonight I will start tying up the bull calves as I put halters on last night… Always an exciting time. I will leave you this morning with a picture of Medusa hanging out with her mom taken this morning. 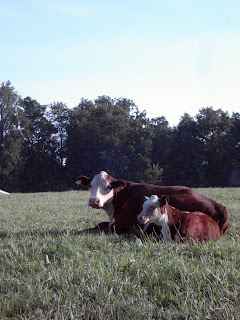 It keeps getting closer

We continue to inch closer and closer to the upcoming Iowa State Fair each year this is my biggest event and the one that I look forward to the most. This year I have registered a heifer and two bulls but I’m not sure if the bulls will make the cut… I guess time will tell. I am also currently kicking myself for not entering my January heifers that I purchased with their mamma’s from Star Lake… there is always next year! We had a ton of rain last week and the made everything at the farm a mud hole and almost impossible to keep the cattle clean so the rinsing has been put to a halt. Most everything else is going well all things considered. I will wean the remaining calves shortly after or right after I pull the bulls on the 9th and that will once again increase the excitement level on the farm!

Welp that is all for this post other then this cool picture of a few of the weaned bull calves walking to the bunk. 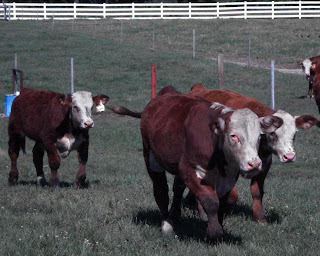 I’ll start this off with a few pictures!

Here are a few pictures that I took today at the farm… The place has really started to shine lately with both the cattle and the farm really thriving. Hope you like what you see… will post some more as progress continues. 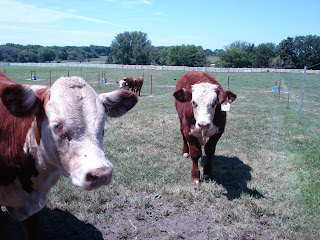 G.R.I.N.D on the left and Cash on the right think it’s time to get some feed… too bad it was even close to time! 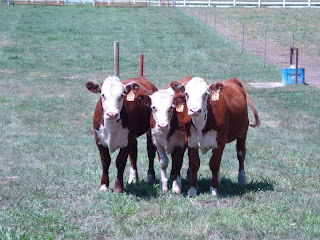 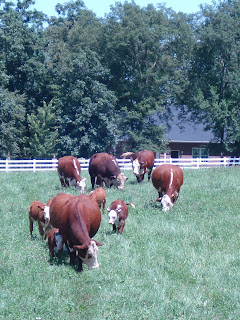 Mommas and babies out grazing 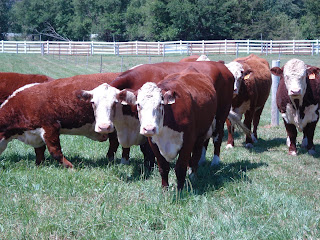